What is it? TempSure Envi is a brand new device that uses radiofrequency waves to smooth and tighten skin.

Why is it better than other RF devices? Cynosure, the maker of TempSure Envi has designed a device that stimulates the nerves much less than other devices, therefore a higher temperature can be applied which means TempSure delivers results faster, more efficiently and with less irritation to the skin surface. The PAIN-FREE treatment time is approximately 20 minutes per area, with NO DOWNTIME.  99% of patients described TempSure as relaxing!

Obviously Amanda Rose Esthetics is thrilled to be offering this revolutionary treatment, but we’re not alone! Check out this article from Marie Claire, and then call Amanda’s office to learn more!

What if I were to tell you that you could tighten your skin, soften your fine lines, and give your face the overall appearance of a dewy 22-year-old who’s spent her life living in a bubble? Oh, and it would only take 20 minutes? And oh, there would be virtually zero side effects or downtime?

You’d probably call me a liar or a witch, and honestly, both would seem correct, because this technology shouldn’t exist. And yet, thanks to the modern world and the FDA, it does now in the form of a little device called TempSure Envi. 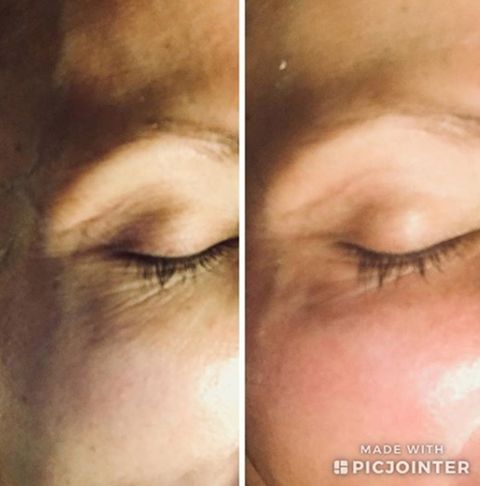 TempSure is a heating device that emit radio frequency waves (don’t worry; they’re safe) deep into your dermis to stimulate collagen production. “It tricks your body into thinking it’s been injured, so your body will send growth factors to the area to build new collagen,” says dermatologist Arash Akhavan, M.D., founder of Dermatology and Laser Group in New York City. “That leads to firmer, tighter, less-wrinkled skin.”

The device itself isn’t revolutionary—heating devices have existed in your dermatologist’s office for years (think Ultherapy, Thermage, Thermi, and Pellevé). Instead, what’s extraordinary about TempSure is the way in which the radio waves are delivered into your dermis. “Tempsure stimulates your nerves much less than with other devices, which means we can use a higher temperature without any pain, making it faster and more effective,” he says. 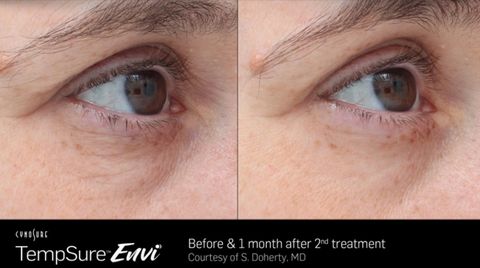 Dr. Akhavan is among the first dermatologists in the world to have a TempSure in his office (it’ll be rolling out to other dermatologists in the coming months), and he assures the very skeptical me of just how painless the treatment is. “I’ve tested it out on myself, and there’s really no discomfort—you just feel a warming sensation on your skin—and there’s absolutely zero downtime,” he says. “You could get it done over your lunch break, and nobody would even be able to tell.”

Another magical thing about the procedure: The whole thing is over pretty quickly. Though the treatment time depends on area size, Dr. Akhavan says most places (like the full face, the full abdomen, above the knees, and behind the thighs) take 20 minutes each, with results seen almost immediately. “You’ll see some tightening effects after your first treatment, though the real improvements set in after four-to-six weeks,” he says. 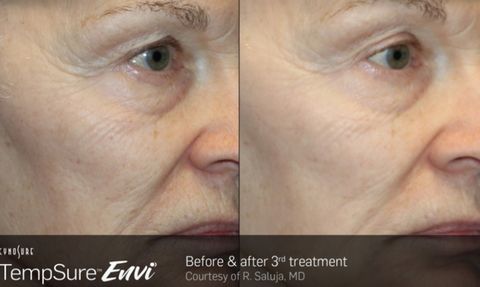 Annoyingly, you do need more than one treatment—four treatments total, spaced every two-to-four weeks, depending on what you’re getting done—but the results are permanent. “The collagen that you generate from TempSure is permanent, though it won’t prevent gravity’s natural toll, which is why we recommend a touch-up session every six months or once a year,” he adds. But, of course, that’s totally optional, if you feel like chancing it.

“It’s a big leap in technology, in terms of results and comfort,” says Dr. Akhavan. “It’s truly the most-effective face lift and neck lift that doesn’t require surgery, Botox, or retinol.” The only downside? It ain’t cheap.

Prices vary, depending on where you live, who you see, and what you get done, but you can expect to pay between $2,000 and $4,000 for a set of four treatments. Still, if you’re looking to amp up your skin, and you’ve got some money to burn, why not immediately book a dermatology appointment? Excuse me while I go book mine.

Most of us have more than one area of concern to tackle.  With the Icon system, Amanda can bring new results to multiple issues with minimal treatment time. Each patient’s areas of concern will be evaluated at the time of consult. Amanda will provide details such as how many treatments will be necessary to achieve desired results, and what to expect during and after treatment.

And the excitement doesn’t end there!  Stay connected with Amanda Rose Esthetics and don’t miss updates announcing the arrival of the newest radiofrequency technology that will offer fast and PAINLESS (woo hoo!) skin tightening results for:

Keep an eye out for upcoming opportunities to learn more about these developments and how you can maximize your results. If you just can’t wait to explore the options with Amanda, call her office to set up a consultation!​(703) 473-3224

All three are very similar in composition and work the same way to temporarily block nerve impulses to muscles, resulting in reduced or eliminated wrinkles caused by facial expression. You won’t stop smiling or frowning, but you will stop wrinkling!

During treatment, a very fine needle will be inserted for a few seconds with little more than a pinching sensation (a flu shot is much more painful than a stick of Botox.) Patient comfort is of great importance to Amanda and therefore, topical anesthetic cream can be applied to the area prior to treatment to reduce sensitivity.

And here’s the basic fact that has made this treatment the number one anti-aging procedure in the U.S; you’re investing in your future. By minimizing the intensity and frequency of movement, these treatments also prevent the formation of deeper lines down the road. This adds a great deal of value to an already attractive package.

The most common areas addressed are forehead and between the brows, however treatments are often applied to other areas. Amanda will spend time with you to learn about all your hopes and dreams and together you’ll develop an action plan to achieve them.

Have you been considering doing something about the areas of your face that seem to be sinking, deflating or wrinkling at an alarming rate?

Any rate is alarming when it comes to the preservation of your most important physical feature, your FACE! The options can be overwhelming when first considering facial rejuvenation.

Let’s start with defining the two most common treatments.

Botox (and other brands which we will discuss in a later post) is an injectable neurotoxin that works by stopping communication between the nerve and muscle, forcing the muscle to relax. Botox type injectables are mainly used in the upper face where wrinkles form as a result of facial expressions. The results are smoother forehead lines, crows feet, and frown lines, just to name a few possibilities. Additional areas can also be treated such as corners of the mouth and “orange peel” chin.

Filler is ideal for filling in lines and creases, plumping lips and cheeks and enhancing facial contours. Amanda prefers using a hyaluronic acid filler, a substance naturally found in the body in the soft tissue that surrounds and cushions the joints. Amanda chooses the type of filler used based on the area of the face and specific needs of the patient.

During a consultation, Amanda will determine the most ideal product and technique to accomplish your desired outcome.

We no are offering PRO-NOX!

PRO-NOX™ is a gas system designed to deliver a 50% oxygen and 50% nitrous oxide mixture to patients for the relief of pain and anxiety during medical treatments.

It is patient-controlled Inhaled Analgesia for In-Office Use and takes effect in seconds, offering immediate relief of pain and anxiety.  It is also out of your system in a few minutes! Patients are able to still drive home after using PRO-NOX.

It is perfect for aesthetic procedures which include Vampire Hair Restoration, Vampire Face Lift, O-Shot, Cosmetic Fillers and Medithreads to name a few!!